The ODC was created in 1974 by the Hawai`i Supreme Court to conduct investigations and prosecute complaints where a Hawai`i lawyer is alleged to have violated the Hawai`i ethics rules then in effect and as subsequently enacted.[1] In addition, the ODC provides general guidance and education to Hawai`i licensed attorneys. The Disciplinary Board is fair, impartial, and vigorous in its enforcement of the Supreme Court’s rules to protect the public, including clients, the judicial process, and the legal profession.

and costs assessed against disciplined Respondents[2]. Ethics investigations are conducted without charge to any complaining party. 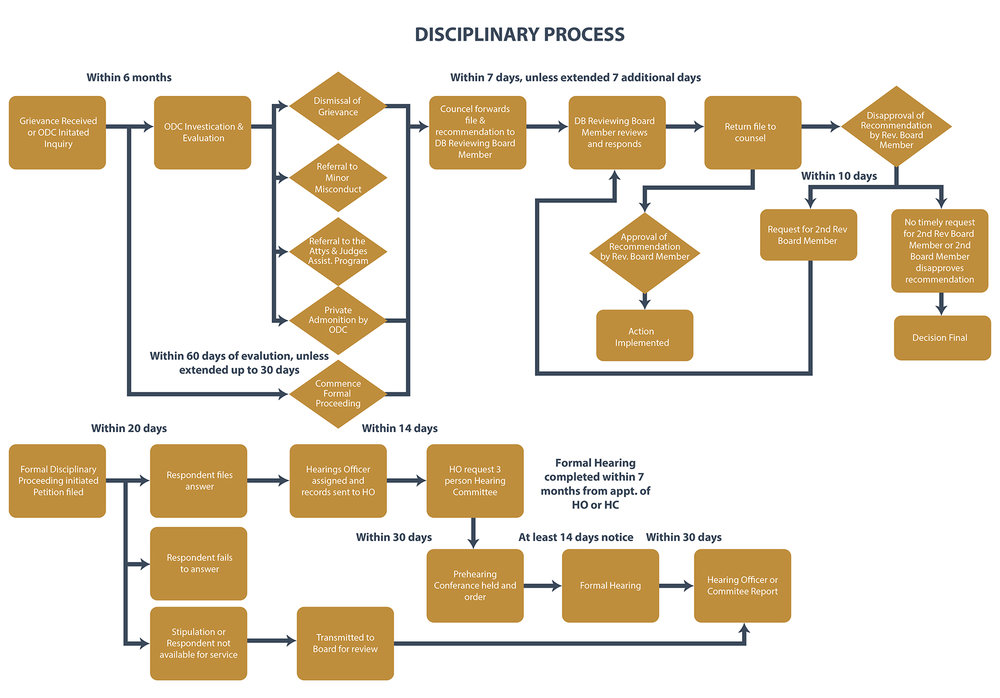 In addition to its authority to impose a private reprimand, the Disciplinary Board may, in more serious cases, sanction an attorney with a public reprimand — with the consent of ODC and the respondent[4]. Other recommendations for public discipline such as public censure, suspension, or disbarment must be submitted by the Disciplinary Board to the Supreme Court.

Attorneys who have been disbarred or suspended may seek reinstatement, but may not practice law until reinstated by Supreme Court Order[5].

Attorneys subject to a pending disciplinary investigation or formal proceeding may resign in lieu of discipline or consent to disbarment by delivering to the Board an affidavit complying with applicable rules[6]. The affidavit must include a factual description of the grounds for discipline. The Chairperson of the Disciplinary Board will then review the respondent’s affidavit to determine whether it is in proper form[7]. If it is, ODC initiates proceedings in the Supreme Court by filing a petition for resignation in lieu of discipline or a motion for disbarment by consent[8]. The respondent’s affidavit is then filed with the petition or motion[9]. Because the respondent has consented to the resignation or disbarment, the Supreme Court issues an order granting the resignation or disbarment by consent without waiting for a response from the respondent[10]. The admission submitted in connection with a resignation in lieu of discipline  while “a matter of public record … shall not be used in any other proceeding except upon order of the supreme court or as otherwise allowed by” the Supreme Court’s rules [11].

A hearing on a complaint is held only if a formal disciplinary proceeding has commenced.

When a formal disciplinary hearing takes place, a Formal Hearing Officer (FHO) is appointed by the Chairperson of the Disciplinary Board[12]. The FHO may elect to proceed singly or convene a three-person Formal Hearing Committee (FHO) which may include one non-lawyer[13]. The FHO/FHC then convenes to take evidence[14]. The procedure is somewhat similar to a civil trial or arbitration. The complaining party may be called as a witness, testimony is given under oath, and documentary exhibits are entered into evidence. A full and official record is kept of the proceedings[15].

REVIEW BY DISCIPLINARY BOARD

The Disciplinary Board, on review of the FHO/FHC Report, may follow the recommendations in the report, or may elect lesser or more severe sanctions[19]. The Disciplinary Board has the authority to impose a private informal admonition (without consent), or a private or public reprimand upon the attorney (with the consent of the respondent and ODC), in which event the disciplinary proceeding terminates.[20] Like an admonition, a reprimand remains on the attorney’s record and may be taken into account should a future disciplinary proceeding occur. If the Disciplinary Board determines that more severe sanctions than admonition are warranted, it will make its recommendations to the Hawai`i Supreme Court.[21] The record including those recommendations, along with the Hearing Report, is forwarded to the Supreme Court for final determination[22].

Where the Disciplinary Board recommends public discipline beyond a public reprimand, such as public censure, suspension or disbarment, the case must be submitted to the Supreme Court for final determination (an attorney or ODC can also seek Supreme Court review if the party disagrees with the imposition of a private or public reprimand; however, a complaining party has no standing to appeal). The Supreme Court will then independently review the entire case and determine the final outcome[23].

While the identity of a privately-disciplined attorney cannot be revealed by the Disciplinary Board or the ODC, disciplinary sanctions are cumulative, and the imposition of an admonition or reprimand in one case can be used against the attorney as an aggravating factor should he or she be found guilty of an ethical violation in the future.[25] The previously confidential private admonition or private reprimand can then become public[26].

Language ID Cards in 13 languages are now available on the Hawaii State Judiciary website. Persons with limited English proficiency (LEP) will be able to print the Language ID Card and show it to ODC staff when they come to the ODC. A generic (English) version is also available, so LEP persons who speak a language that does not have a Language ID Card can fill in their name and language.

Order Amending Rule 8.5 of the Hawaii Rules of Professional Conduct

Order Amending Rule 2.1 of the Rules of the Supreme Court of the State of Hawaii

Check It Out – Assess Yourself:
Law Practice Self-Assessment